Yes, I know, I haven’t posted in awhile, but real life got a bit busier.  More importantly, though, I was prepping and getting ready to start a second group.  My “main” group is my three children.  14 year old daughter, and 9 year old twin boys.  My daughter lives with my ex, and is over every other weekend.  Other activities often coincide with her visits, so we don’t always play as often as we like.  My boys have been wanting to do a group with just them for our other weekends. 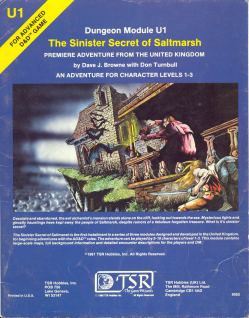 I had started checking out adventure paths, and narrowed it down to a handful.  Left it up to the boys to decide on our theme, and Skull and Shackles won.  In my readings of the AP and some reviews I decided I really didn’t like the start of it, and instead decided to go classic and start with the Sinister Secret of Saltmarsh.

Our party consists of 4 members.  Each boy is playing two characters, starting at 3rd level.  We’ve used some backgrounds and subclasses from around the blogosphere, and I’ll be linking them…

I told them that they were on a ship, the Drake, they were leaving Monmurg and sailing to Gradsul, in the Kingdom of Keoland.  I asked them how they got together and why were they going to Gradsul.  They all met in Monmurg and heard there were riches to be found in Gradsul, so they all were stowaways on the Drake.  Two days after leaving port, rough seas are felt as a storm hits the ship.  They hear a loud CRASH from above.  After night falls, Garret sneaks up on deck and discovers that the main mast has been broken, and the ship is now limping along.  They make a plan and under the cover of darkness steal the lifeboat and sail away.  A couple days later they see a town, and set course and land in Saltmarsh.

The dockworkers are friendly, and help them tie up their boat and direct them to the Dockmaster.  He tells them there will be docking fees of 3sp per day, so Faen tells him that they are interested in selling the boat.  After some haggling, the Dockmaster agrees to help find a buyer for 30% to the final price.  A merchant ship should by by sometime this month that the group can book passage on.  The coastal road towards Seaton has been partially washed out by the storm, and the other alternative would be to hire a guide to raft them through the surrounding swamps.  They decide to wait for a ship.  He directs them to the Fishbone Inn, the only place in this small town for travelers to stay, where they rent a 4 person room.

They spend a few boring days in the sleepy fishing village before they hear tales of an old haunted house a few miles out of town.  Once owned by a secretive alchemist, the house has been abandoned since the owner’s mysterious disappearance decades ago.  Asking about town they come across an old poacher who once set foot in the house, before being scared off by maniacal shrieking.   Plying him with a few drinks, they coax the story out of him.   He draws them a sketch of the back door he entered, as well as the old kitchen and pantry that he managed to see.

They walk out to the old house.  They avoid the gate, instead climbing through a section of the wall that had fallen.  They head around back, and check out the well.  Henk lowers Ander and Faen down via rope, and they find nothing but a poisonous snake.  The snake lunges at Ander, but it’s fangs don’t penetrate his splint mail.  Faen roasts it with a firebolt.

They enter the house through the front door and creep around the tattered ruins.  Screams and warnings are heard, but Ander correctly guesses that they are magic mouths. They enter the basement early, and find it strange that it is set up like a barracks, loaded with food and beds.  One of the smugglers spotted them at this point, and slipped unnoticed through the secret door, alerting the others.  Sanbalet, their leader, orders the smugglers to stay quiet and set up an ambush in the caves, hoping our heroes leave without discovering what is going on.  They go through the barred door marked “Danger” and fight the six skeletons beyond, most of them wiped out by Faen’s thunderwave. 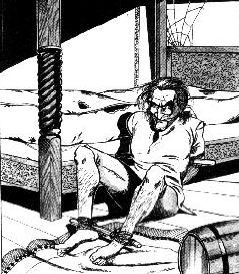 Henk leads the group back upstairs, so they can search the upper floor.  Overall, not much is found.  They do kill a giant spider, and “rescue” Ned, who claims to be a traveler who was looking for shelter from the storm and then was jumped from behind and tied up and left here.  He joins the party as they head back to the basement and do a thorough search for secret doors.

After awhile, they do find the hidden laboratory and the remains of the alchemist that lived here through the skeleton room.  A nice haul was found, and it appears the alchemist had found the secret of the philosopher’s stone.  A golden skull, apple, rose and discs were found, over 1,000 gp value in all.  Also his notes on turning items into gold are found, but they are written in code.  Faen hopes to be able to break the code someday…

More searching finally uncovered the secret door to the smuggler’s caves.  A side passage led to Henk getting a green slime dropped on him.  Faen “helped” by burning it off with a firebolt.  Destroyed the slime, but Henk got slightly burnt as well.

They turned a corner and saw a well lit cave.  Inside they found a couple of gnolls, four smugglers and Sanbalet, a wizard and the leader.  Faen leads off with another thunderwave, wounding the gnolls and killing a couple of the smugglers.  Henk charged forward to the wizard, only to get blinded by a color spray.  Ned got a sneak attack in on Ander just as four more smugglers entered the room.  Faen fired off scorching rays, and the others darted around in melee.  Everyone got beaten down pretty well, but they were finally victorious.

They found a stock of silk and brandy, luxuries that the smugglers were avoiding taxes on.  They also found another small boat, that they loaded up with the contraband and other loot and set sail back to Saltmarsh.