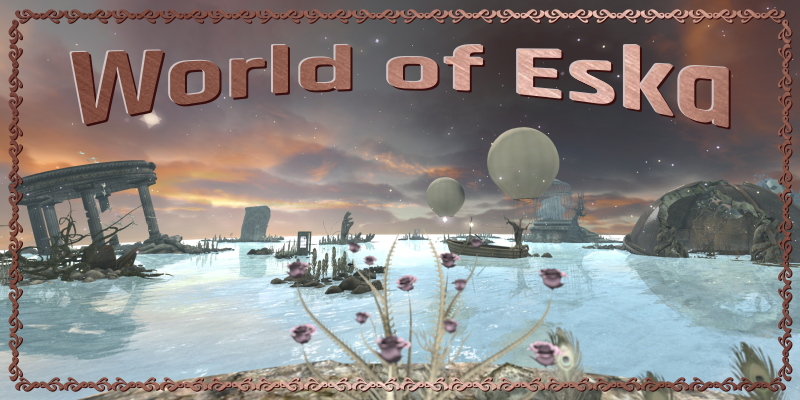 I’m wanting to get the different races of Eska done first, before moving on to classes.  My next in line was going to be dwarves, but they weren’t coming together the way I wanted to.  Since the three subraces of elves formed the dominant power before the Kinslayer Wars, I’m going to finish them out before moving on to the other races.  Most of the lore of Eska is only a rough outline I have typed out as well as some nebulous ideas floating in my head, and seems to change and take shape as I write it.  Wanting to provide pictures to go along with my ideas, things get changed depending on what I can find with a Google image search as well, since I have no artistic talent. I’ve noticed a linguistic shift recently as well, though not as much noticeable in what I’ve posted.  I’ve been using this English to Elvish translator to come up with many names so far.  Before the Kinslayer Wars, the elves were the rulers of Eska, and many place names and other “older” things are named in elvish.  Since the war has subsided, the elves have retreated and become reclusive.  Humans and other races are now stepping forward, and some newer names are starting to reflect this, such as the common words that now name it the Kinslayer Wars.
Wood Elves of Eska (taur’edhel)

The wood elves, or taur’edhel, served as the scouts and provided most of the food for the elven empire that grew and roamed in their lush forests.
While the gray elves are aloof and haughty, the wood elves are a distrustful and xenephobic race.  Where the gray elves will ignore or look down upon you, the wood elves will likely kill or capture you, just for stepping foot in their lands.
The taur’edhel are masters of the Forenya’taur, the great forest that covers the northern part of Eska.  They build great treetop cities, guarded by griffon riders, known as the thoron’raa’roch.  Many wood elves never touch the ground during their lives, except for their hunters and bands of rangers and druids accompanied by packs of cooshie that patrol the forest floor that keep outsiders at bay.

Masters of the bow, the thoron’raa’roch and rangers supplement their normal arrows with me’urra’pilin, or lightning arrows.  These function as normal arrows, having the same range when fired, but doing lightning damage instead of piercing and having a “tracer bullet” effect when fired.  About a third of arrows in a taur’edhel quiver will be me’urra’pilin.
During the Kinslayer wars, looking to bolster their numbers, the taur’edhel used their sorceries to transform their cooshie into humanoids, and set the huan’apan (dog men) packs loose to fight the mori’edhel and their spider beasts.  These huan’apan packs now roam loose throughout all of Eska.  Since the Kinslayer Wars, the taur’edhel have retreated into the Forenya’taur, and except for a few individuals, rarely leave.  While once in firm control of the huan’apan, many of them have broken free, but still remain on good terms with the taur’edhel.  While they sided with the mith’edhel (gray elves) in the fight against the mori’edhel (dark elves), they now distrust both races, since the details of the start of the War have become cloudy.  They dislike the hobgoblin forces and goblin servants of the gray elves as well.  They trade with the rock gnomes whenever their crawlers make their seasonal stops along the edges of Forenya’taur, and festivals have begun to spring up around these trade fairs.  The crawlers are too big to enter the forest, so the rock gnomes rarely enter.  Warforged are generally on good terms with the taur’edhel, since the elves find these creatures of living wood, stone and metal fascinating.  While few in number, some forest gnomes do live in the Forenya’taur.  They consider the dwarves, or talant a joke, since the mori’edhel have driven them from their halls at the end of the Kinslayer Wars.  They usually underestimate humans, and are often amazed and surprised at their versatility.  Those saurians (takel’var) that already dwell in the Forenya’taur are tolerated, but those from outside are often killed, though the wood elves often can’t tell the difference, either killing or ignoring any groups they encounter.  The wood elves worship Rillifane Rallathil, though many are starting to follow the Seelie Court, which is causing some rumbles throughout taur’edhel society. The taur’edhel use the same statistics as wood elves from the Player’s Handbook.

Common weapon This arrow does 1d8 lightning damage instead of piercing. When fired, they also have a “tracer round” effect.