I would like to first give out a big thanks to everyone that reads these posts.  Looking at my blog statistics, out of my top ten viewed posts, 7 of them have come in the last two months.  I’m excited about this expanded audience.  If you like what you see, consider supporting my Patreon!

It’s been pointed out to me a while back that it seems that they could very well be no humans on Eska, that it seemed very elf-centric.  That couldn’t be further from the truth.  I felt that recent events (if you could call a 1000-year elf war recent), formed the core of what is going on in Eska, and that the elves story needed told first.  Actually, human mercenaries formed the bulk of most of the elvish armies.  The elves viewed human lives as more disposable than the elves, and often it was cheaper to pay for mercenary companies then to use their magic to create the hobgoblins and huan’apanonar.

The history and core of Eska does revolve around elves, but theirs is a society on the decline.  Humans are on the upswing, with true human kingdoms and and empires ready to rise for the first time. Right now, though, Eska has a very Mad Max/Fallout vibe going for it right now.  The land has been devastated by war, and life is a struggle.  The elves used their magic to summon and create many different creatures to fight for them, and many now roam the land unfettered.  If anything in your worlds are the result of “cocaine wizards”, blame the elven industrial war machine to be responsible here.  Expect wandering monster charts to have more monstrosities and  aberrations than anything else.

I’d also like to give a shout out to James Introcaso as well, since I’m pretty much lifting his grenade and arcane cannon rules wholesale.  While humans have made use of explosive powder to fire cannons, it is far too unstable to be used in rifles and handguns, though.

Eska is still pretty fluid in my brain at this point.  I find that ideas that I have and start working on change and mutate while I write.  Things will probably continue to change as other ideas pop into my head.

Humans of Eska
Humans were the first people of Eska, wandering tribes of hunter-gatherers that roamed the land.  Eventually they started settlements and a few small city-states had popped up when the orcish ships landed on the shore and found the land ripe for the picking.
The orcs and goblins laid waste to Eska for generations, enslaving most of humanity.  They brought their dwarven and gnomish slaves with them to better capture the abundant natural resources that were present both above and below the earth.
This intense and persistent ravaging of the land uncovered the hidden but abundant magical energy that crosses the land.  Ley lines surged, bringing both the Feywild and Shadowfell closer.

It’s when gates to the Feywild opened that the elves crossed over, and the Orqu’ohta, the Orc War, began.  The elves slaughtered the orcs to the last, and subjugated the goblins.  The humans, dwarves and gnomes were freed.  The humans formed several small kingdoms, most pledging fealty to the elves that decided to stay in the land they freed.

When the Kinslayer Wars started, most of these human kings raised armies, and being opportunists, used them as mercenary forces to whoever gave them the best terms.  The human mercenaries proved most versatile, each unit finding areas of specialization.  Grenadiers and those that had cannons were in highest demand, and those with arcane cannons devastated battlefields.  Human sorcerers seem the most closely connected with the ley lines as well, gaining additional benefits that other sorcerers can’t. 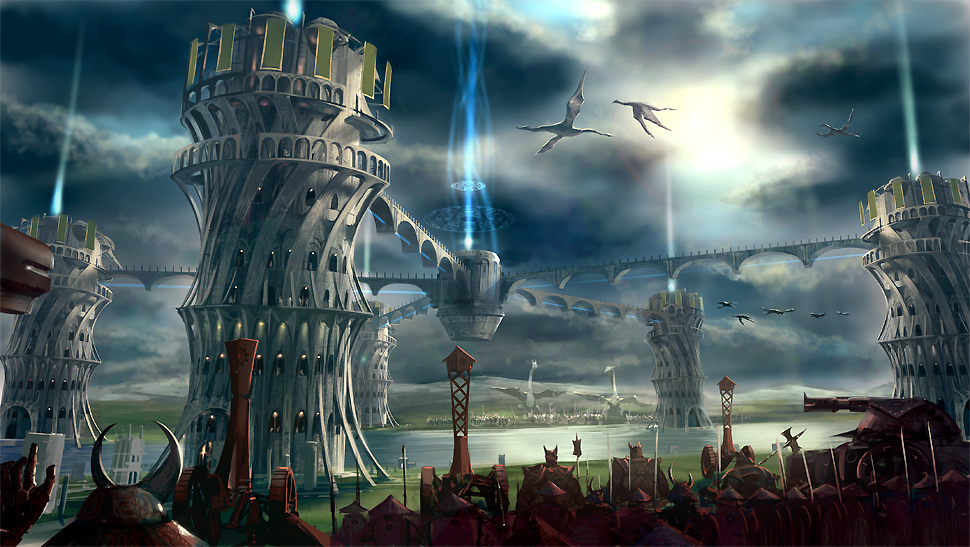 Since the Kinslayer Wars, the elves have become insular and withdrawn, and the humans, and their newfound war power, have looked to fill the void.  With generations of humans knowing nothing of life but war and struggle, and no funds coming in to pay the mercenary companies, most have taken to banditry and iron fist rule.  In the year after the truce they swelled, merged, organized, spread, and operated with ever more license. Seizing a castle, they would use it as a stronghold from which to exact tribute from every traveler and raid the countryside.
They imposed ransoms on prosperous villages and burned the poor ones, robbed temples and shrines of their stores and valuables, pillaged peasants’ barns…As the addiction took hold, they wantonly burned harvests and farm equipment and cut down trees and vines, destroying what they lived by, in actions which seem inexplicable except as a fever of the time.  In most settlements, visits from bandits and strange rampaging creatures outnumbered those from merchants.
No true kings have risen up, however.  No great kingdoms have taken place.  Small city-states and bandit kingdoms rule.  A ruler may have a few hundred soldiers and whatever land can be held with that size of a force, usually within a day’s ride.
Humans, by their mercenary nature, can get along well with any of the other races of Eska, though personal and regional prejudices do hold sway.