I wanted to have lizardfolk as a playable race for Eska, but I wanted them to be different.  I toyed with the idea of asabi or firenewts, but none of them really clicked.  Then I was going through Dragon Magazine #103 and there it was…towards the back, in the Ares section, the Saurians, for Star Frontiers, by Jeffrey Bouley.  I’d only ever played a few sessions of Star Frontiers back in the day, but I do remember adding these guys into my playable options.

The article in Dragon listed four subraces, but I didn’t see enough mechanical differences to support all four, so I chose two, the Kavak and the Talsoi.

Saurian
The saurians are one of the original races of Eska. For a time they lived in peace, enjoying profitable trade with nearby humans. Soon, however, the orcs became aware of the saurians and regarded them as both a threat and a challenge to be overcome.

The orcs descended in waves on the unsuspecting saurians, destroying whole populations in the process. The saurians, unused to full-scale war, fought bravely against the orcs, but to no avail. With their defenses decimated and racial destruction imminent, the saurian clan leaders retreated into the coastal swamps scattered around Eska.

Saurian have large, extended families. Because their young develop so rapidly (reaching adult size in five years), “nuclear families” would be short-lived. Education and socialization of the young are handled within each clan, or svik, which may consist of hundreds of individuals living within the same general area. Saurians are interfertile despite their racial types, and a svik may have members both sub-races within it. Svika may compete with each other over business or personal matters, but violent crime among them is almost unknown; they are too aware of their own near extinction as a race from the orc’s attacks. 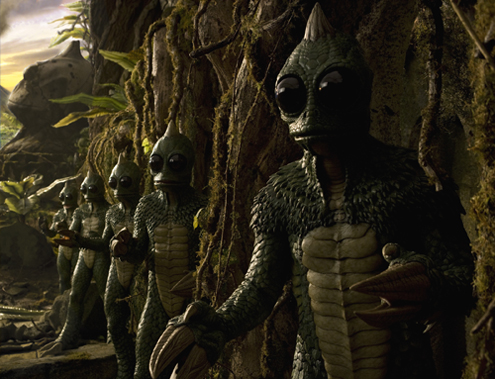 Saurians are extremely touchy about comments regarding them as a species. Any insult against a single saurian is easily taken as a slur against the race as a whole, even if the Saurian in question belongs to another svik. Saurians tend to be overprotective of their fellow clan members, even as they recognize the importance of standing on one’s own two feet. This causes such stress for them that they will not willingly discuss it with someone of another species.
Saurians are something of a paradox to other races, as they are both gentle and kind as well as vengeful and brutal. Among friends and their svik, a saurian is pleasant, cheerful, and absolutely loyal. But in the presence of a hated enemy, a saurian’s rage and fury can be frightening (although saurians do not receive any bonuses for rage in combat). A wrong done to a saurian will not be forgotten by any of them, and making amends can be difficult (or impossible, depending on the offense). Should the offending party make an appropriate apology, the saurians will grudgingly accept it and continue with the business at hand though forgetting about the incident will take months or years.
The horrifying losses that they took in their war with the orcs have made Saurians a militant race. They tend to purchase large quantities of arms, and groups of them have expressed interests in creating their own military force.
They have a natural affinity with large reptiles, often using ankylosaurus, triceratops and stegosaurus as mounts and beasts of burden.

Saurians have from three to four names. The first two are the common and svik names, comparable to a first and last name. If the Saurian performs an important deed, he or she may receive an honorific to signify this accomplishment. The most important of all names, however, is the tarish satimu (“sacred name”). According to saurian religious beliefs, the tarish satimu is a part of the owner’s very soul. Only the individual saurian and his svik will ever know the Saurian’s sacred name.  Should someone somehow discover a Saurian’s tarish satimu, it is considered an insult of the most terrible kind, and the Saurian will try to regain his honor through a duel of some sort, often to the death. 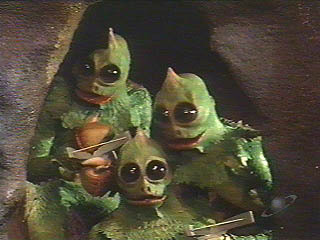 Saurians are respectful of the other races, but they particularly enjoy and are fascinated by elves. They respect dwarves for their drive, but find it hard to make friends with them; the dwarves are too unstable. Saurians find Humans fairly easy to get along with.
Huan’apan are another matter. Though huan’apan and saurians are alike in certain social, political, and family matters, the saurians find the former to be rude, insulting, and pushy. Fights between individuals of the two races have tended to turn into widespread brawls as clan members from either side are drawn into the conflict, and even in the short time that huan’apan have been in on Eska, several remarkable feuds have developed. When it happens that a huan’apan and a saurian become friends, however, they become friends for life.
Saurians dislike hobgoblins greatly, because of the latter’s similarity to orcs and goblins business practices. Hobgoblins dislike saurians in turn. Other races are generally friendly toward the saurians, despite their touchiness, but some humans are slightly nervous around saurians, particularly if they have an aversion to reptiles. This reaction is fortunately rare.

Saurians are bipedal reptilian humanoids that stand between 6 and a half and seven feet tall. Each of them has two hands, each with three fingers and an opposable thumb. Each foot has four toes; feet, as well as hand, are webbed. Saurians have small scales, as per their reptilian ancestors, but they are warm-blooded as mammals are. Saurians are omnivorous and have rather flat teeth.

Being semi-aquatic creatures, Saurian feel at home both above and below water. As part of their aquatic adaptations, Saurians have a gill slit on each side of their throats which filter oxygen, out of fresh and salt water. Saurians also possess underwater vision of exceptional quality. 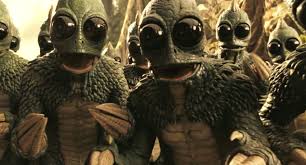 Ability Score Increase.
Your Strength score increases by 2.
Age.
Saurians mature faster than humans, reaching adulthood at 5 years of age. They also have shorter lifespans, with few saurians living longer than 60 years.
Alignment.
Saurians stress two beliefs above all others in their society: individuality and the freedom of choice. Saurians detest dictatorships and prefer very loosely structured governments, having an uncaring attitude for authority, though they will obey it if convinced it is for the common good. They believe in self reliance.  Most saurians are chaotic good.
Size.
Saurians are bipedal reptilian humanoids that stand between six and a half and seven feet tall.  They can weigh anywhere from 200 to 250 pounds.  Your size is medium.
Speed.
Your base walking speed is 30 feet. You have a swim speed of 30 feet.
Keen Senses.
Saurians have a slightly more acute sense of vision than humans and, as noted before, can see well underwater. Saurians do have a more acute sense of smell than humans.
You gain proficiency with Perception checks.
Aquatic.
You are able to breath both air and water.
Natural Weapons.
Saurians still have certain physical defenses inherited from their prehistoric ancestors. One of these is the set of claws on fingers and toes. Although these claws have degenerated, they can still be used to some effect.
When you use your claws for an unarmed strike, you can cause either slashing or bludgeoning damage.
Languages.
Saurians are able to speak in the same manner as Humans.  Saurians tend to lisp, and speak with hissing voices. When angered, Saurians hiss loudly and bare their teeth.
You speak, read and write Draconic, plus one additional language of your choice (typically Common).

The Saurians evolved from a highly adaptive creature that were known as land dragons. This creature was found in a variety of habitats on Eska and developed into the two known races of Saurians: the Kavak and the Talsoi.
Kavak
These saurians have green scales, a long tail, and a short, curved horn protruding from the top of their skulls. The horn varies in color from one saurian to another, from white to green; it is light-colored at birth and darkens gradually as the saurian grows older.
The kavak are more numerous, and are mostly the warriors and hunters of the svik.
The kavak evolved from a grasslands dwelling dragon that used the horn for defense and the green coloration for camouflage (allowing them to approach prey more easily).

Your Dexterity score increases by 1.

Your horn can be used as a weapon, causing 1d10 piercing damage.

Your Wisdom score increases by 1.

Your tail can be used as a weapon, causing 1d10 bludgeoning damage.

Because of their nervous structure, talsoi have a pronounced resistance to enchantments, charms, or mind control of any kind.  You have Advantage on Saving Throws against these types of magic.
You also gain Proficiency in Insight.