I had originally had thoughts of using gnolls as a playable race on Eska, and using them much in the same way as I use the hobgoblins, and the goblins that are still to come. Somewhere along the line the thought of three “evil” races working for the elves seemed a bit off, so the gnolls kept getting pushed down the to do list until I came up with something.  Then, back in September, William Paterson posted his 5e version of the cooshie, and it dawned on me that an anthropomorphic cooshie was a better fit than a gnoll. It took me awhile to get all the details right.

The wand of teeth is a conversion of an item that originally appeared in Dragon Magazine #102, written by Ed Greenwood.

Huan’apan
Another one of the “young” races of Eska, the huan’apan were created by a combination of taur’edhel (wood elf) druids and sorcerers awakening and mutating their pet cooshee during the Kinslayer Wars. Seeing the success of the hobgoblins, the taur’edhel wanted to copy that success, but in their own way.

They appear much like the gnolls of others worlds look, with canine heads and covered in fur, though huan’apan fur is generally green in color, with stripes and spots of various other shades of green with browns and black mixed in. Huan’apan have limited color vision, sharp ears, and an even sharper nose.
With the number of huan’apan created, and the many litters that have been born since the Kinslayer Wars, large packs roam across the surface of Eska. Some have settled down, but most packs are nomadic, following herds of beasts that they prey upon.

Huan’apan are the soul of loyalty and devotion. Nothing pleases them more than help their companions in any way they can. They are very laid back and fun loving when not on duty or assigned a particular task. The moment that they are given a task then their carefree nature disappears and they become deathly serious, stopping at nothing to complete their task.

The taur’edhel eschew front line combat, and the huan’apan do as well. Their combination of keen senses, camouflage, and mobility lends them well to roles as sentries, scouts, ambushers, and skirmishers.

Dwarves – What few dwarves huan’apan have encountered are likeable enough. Fine warriors, and fun loving, but something is not quite right about them.

Humans – Humans are a mixed lot when it comes to the huan’apan. Some have become great friends, while others are great enemies.
Gnomes – The huan’apan quite enjoy the trade festivals that have sprung up whenever the gnome crawlers come to the Forenya’taur.
Gray Elves – Arrogant and one of the main causes of the Kinslayer Wars.
Wood Elves – If it weren’t for the taur’edhel, the huan’apan would still be cooshie. They are very loyal and trusting of their elven companions.
Dark Elves – A hated foe. Many battles fought against them, but the war is over. Still not to be trusted. Very condescending.
Saurians – Can’t seem to relax enough, and are pretty touchy. Most encounters start off with brawls, and some epic feuds have developed between the two races. When it happens that a huan’apan and a saurian become friends, however, they become friends for life.
Warforged – Something is not quite right about the warforged. They smell a bit unnatural. Still, they are closely associated with the gnomish trade festivals, so they generally like them.
Hobgoblins – They have the proper focus, but lack the balance of joy and relaxation. Being of goblin stock they are disliked.
Goblins – Much like their wood elf companions, the huan’apan feel that the goblins are to be distrusted.
Cooshie – The huan’apan still feel very close to their cooshie roots, often still traveling in packs with them.  The wood elves rarely raise cooshie to huan’apan any more, though many feel nostalgic towards cooshie. Others feel pity for them at times, wishing to be able to raise them up. 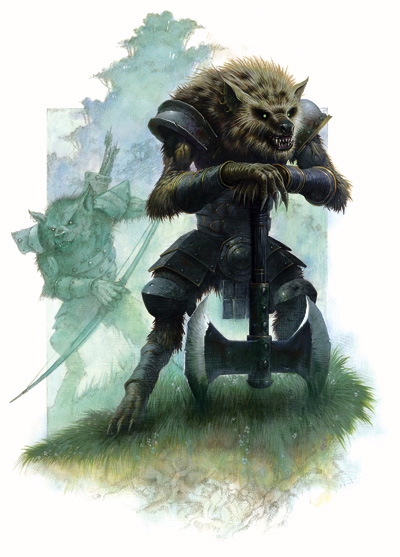 Ability Score Increase. Your Dexterity score increases by 2, and your Strength score increases by 1.
Age. Huan’apan mature a little faster than humans, reaching adulthood around age 14. They age noticeably faster and rarely live longer than 75 years.
Alignment. Huan’apan love freedom, variety, and self-expression, so they lean strongly toward the gentler aspects of chaos. They value and protect others’ freedom as well as their own, and they are more often good than not.
Size. Huan’apan are somewhat larger and bulkier than humans, and they range from 5 to well over 6 feet tall. Your size is Medium.
Speed. You are swift of foot. Your base walking speed is 40 feet.
Camouflage. Due to your coloration, you have Advantage on Dexterity (Stealth) checks when in forested terrain.
Keen Hearing and Smell. You gain proficiency in the Perception skill.
Pounce. If you move at least 20 ft. straight towards a creature and then hit it with a melee attack on the same turn, that target must succeed on a Strength saving throw or be knocked prone. If the target is prone, you can make one bite attack against it as a bonus action.
Strength save DC = 8 + your proficiency bonus + your Strength modifier
Natural Weapons. You can bite for 4 (1d4 + 2) piercing damage.
Sprint. Once per minute, you can move double your current speed for 1 round.
Languages. You can speak, read, and write Common and Elf.
Huan’apan druids are commonly armed with a wand of teeth, described below.
Wand of Teeth
Wand, uncommon
While you hold this wand, you can use an action to expend 1 to 3 of its 7 charges to fire off one tooth for each charge expended.  These teeth are dagger-like wedges that pass through everything in their path, except for spheres of annihilation, prismatic spheres, shield spells and walls or cubes of force, all which swallow or absorb them. Teeth have a range of 70 feet.
You must make a ranged attack to strike your target, but you can use either your Dexterity or your Spell Attack bonus. A strike by a tooth does 9 (2d6+2) piercing damage
The wand regains 1d6 + 1 expended charges each day at dawn. However, if you expend the wand’s last charge, roll a d20. On a 1, the wand crumbles into ashes and is destroyed.
Like, Follow, Share, Support!