We finally had a chance to sit down and play again, and continued on with our Age of Worms campaign and continued with the Hall of Harsh Reflections. You can read part 1 here.

They had broken out of the prison and were exploring the Sodden Hold warehouse. A shaft filled with salt water was found, so Dravin wild shaped into a sea turtle, swimming down and finding it lead to a tunnel and a chamber beyond. The group swam down. The chamber had a single pillar, sticking out of water with ladder rungs bolted to the side. A large lever was at the top of the pillar.

As Lylas quickly climbed up, a gigantic octopus began attacking the others wading in the water. It grabbed Narcisso and started to squeeze. Third leapt from the ladder, axe in hand and hacked at a flailing tentacle. Lylas pulled the lever opening several floor drains. The water level started lowering quickly. The octopus flung Narcisso, before fleeing. Narcisso bounced from the wall and splashed into the pool.

A door was revealed that was previously underwater. It led to a hallway with plenty of doors. Working their way around, first they found a planning room, with maps and documents detailing all of what the doppleganger spy cell is up to.

Next room was a couple of sleeping dopplegangers, who the party quietly killed. While searching this room, though, four other dopplegangers attacked from the hallway. I made a mistake here, running it as a straight combat instead of making use of the dopplegangers read thoughts and shapechange abilities.

Before going through the final set of doors, Lylas noticed the floor didn’t look quite right. So they pushed a wardrobe out of one of the sleeping chambers out into the hall. The concealed trap opened, dropping the wardrobe to crash below.

They soon find a door hidden behind an illusionary wall. It lead to a room with ghostly blue light, and each of the six party members, bound to a chair and gagged. They all paused, unsure what to do. Finally they decide to start freeing them. As they stepped forward, Lylas attacked Jackson, while five of the bound members, all except Lylas, slipped from their bonds and attacked! Lylas had been replaced by a doppleganger during their time in the prison. A fun battle but nothing memorable.

Once Lylas was rescued and rearmed, they found their way into a mirrored maze. Shifting walls split the party in half, with dopplegangers attempting to replace them. On alert for such shenanigans, they were able to dispatch the dopplegangers in a series of running battles before reuniting and finding the exit to the maze.

They stepped into a large room, a strange device in front of them, and a raised platform with a throne on it. Sitting on the throne was none other than Allustran, their sponsor! “Come to me and I will reveal all”, Allustran said. The group moved forward, splitting up to go up two separate sets of stairs. Pit traps opened at the base of the stairs, and Jackson and Dravin each fell into one. The others managed to leap forward and avoid the trap, only to be caught in a cone of cold cast by their foe.

Dravin wild shaped into a giant spider to climb out of the pit, while Narcisso pulled out the party’s rope of climbing to rescue Jackson. Lylas, Third and Kargash closed to melee. They spend several rounds hitting mirror images and getting blasted by Allustran’s fire shield when they did connect. Shield spells turned a few hits into misses.

Surrounded, Allustran centered a fireball upon himself. With the fire shield and a good saving throw, he took a mere 7 points of damage. Kargash was knocked to 0 hit points and proceeded to fail all three death saving throws in the following rounds. Dravin’s spider form was toast, and Jackson had his spell counterspelled. The group really had their hands full!

Jackson the fire sorcerer realized most of his spells were going to be half damage, so he started maxing out magic missile spells. Starting to take a beating, the greater doppleganger posing as Allustran cast misty step into a clear area, and changed form into a hulking half orc barbarian. Raging, the greater doppleganger managed to soak up a few more rounds of concentrated attacks before finally being defeated. It’s frostbrand greataxe hit the party pretty hard, and was the key treasure that Third claimed.

Narcisso quickly cast a revivify on Kargash. Badly battered, and with the lair mostly cleared, the party secured themselves and took a long rest.

That last battled stretched pretty long, and we were literally clearing the dice and books from the table as my wife was serving the family dinner. We were discussing the long rest and such for the first few minutes of our meal.

Conversion Notes
The vast majority of the foes were standard dopplegangers. The greater doppleganger’s Allustran guise I used Mike Shea’s wonderful War Mage. A CR 6 caster stood up well to a party of 3 6th level and 3 5th level characters!

One new creature that I statted up was the Gigantic Octopus. Unfortunately the rogue’s climb at normal speeds and use an object as a bonus action to pull the lever drove the beast away before the fight really got going. I tried to fill the gap between the giant octopus in the MM and the colossal octopus from the D&D Wiki. 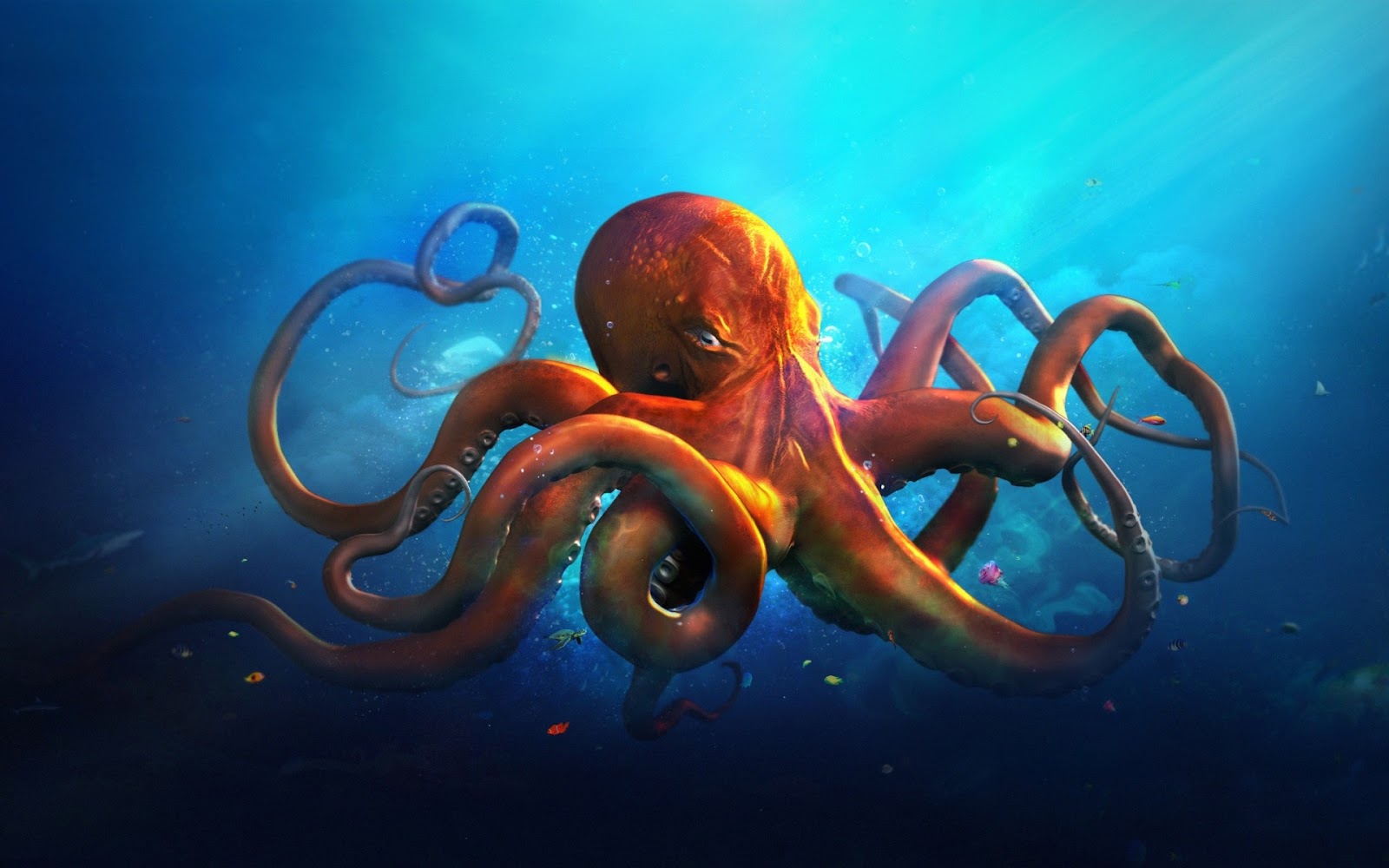 Underwater Camouflage.  The octopus has advantage on Dexterity (Stealth) checks made while underwater.

Water Breathing. The octopus can breathe only underwater.

Multiattack. The Colossal Octopus can make two Tentacle attacks, then a single attack with its Beak.

Tentacles.  Melee Weapon Attack: +6 to hit, reach 15 ft., one target.
Hit: 14 (3d6 + 4) bludgeoning damage. If the target is a creature, it is grappled (escape DC 15). Until this grapple ends, the target is restrained, and the octopus can’t use its tentacles on another target.

Crushing Attack. Melee Weapon Attack: While a creature is grappled the octopus can spend a bonus action to crush all creatures grappled with its tentacles. Each target makes a DC 15 Strength Saving Throw and takes 14 (3d6 + 4) bludgeoning damage on a failed Save, or half as much on a successful one. The octopus can roll two extra damage dice if the target is an object/construct composed of wood.

Fling. While a medium or smaller creature is grappled by one of its tentacles, the octopus can spend a bonus action to throw the creature. The target is thrown 30 feet in a random direction and takes 18 (4d6 + 4) bludgeoning damage if it lands on a solid surface (landing prone), or half as much if it lands in water. If the thrown target hit another creature, that creature must make a DC 15 Dexterity Saving Throw or it takes the same damage and be knocked prone.

Ink Cloud (Recharges after a Short or Long Rest).  A 25-foot- radius cloud of ink extends all around the octopus if it is underwater. The area is heavily obscured for 1 minute, although a significant current can disperse the ink. After releasing the ink, the octopus can use the Dash action as a